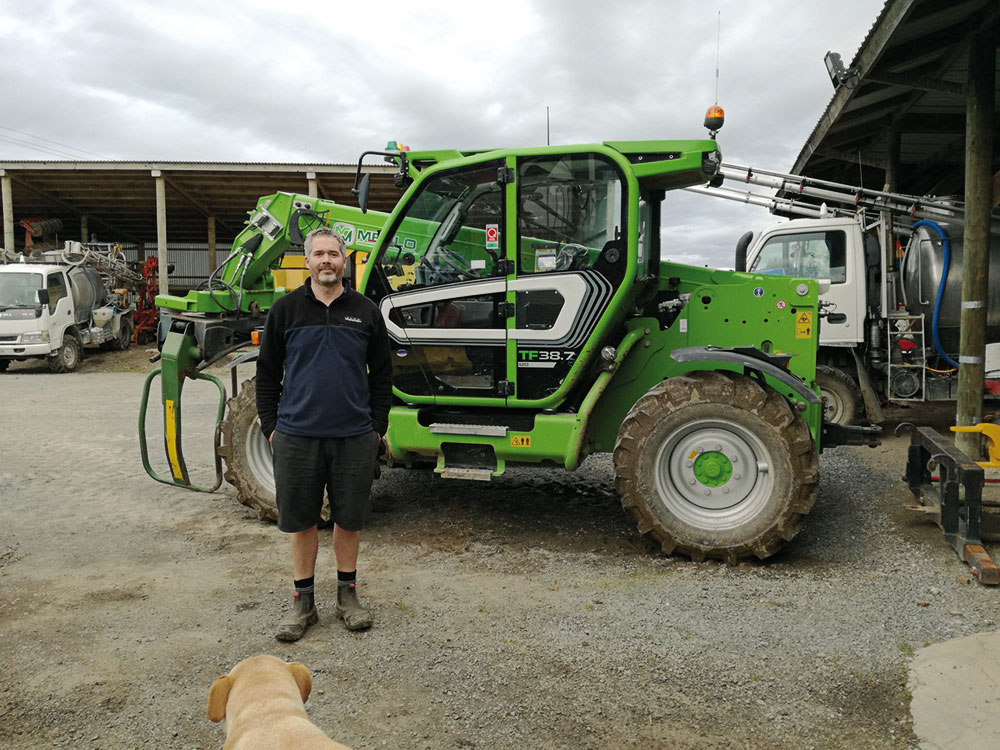 Daniel Teal of Gavin Teal Contracting knew what he was looking for when researching a new telehandler for their family hay and silage, cultivation and seeding business.

Daniel says “I knew I liked the hydrostatic transmission of our older model Merlo, but I wanted to have a look at other telehandlers. I found the Merlo Turbofarmer II was more precise, it allowed greater control through the hydraulic system. For power and precision it’s the best.”

The Hydrostatic Transmission Daniel spoke of is part of the latest Merlo technology, allowing engine and transmission to communicate. Simply, you can operate exactly as in the previous HST mode. The clever stuff optimises the engine power and torque, which is delivered seamlessly to the driveline. This allows increased performance and precision, whilst decreasing fuel consumption by up to 18%.

The system used is called EPD (eco power drive). EPD allows the selection of a desired and constant engine RPM. The drive speed is then controlled by the foot accelerator, which becomes an infinitely variable speed lever.

A feature delivering further precision and control is the Turbofarmer’s ability to have the engine RPM respond to the hydraulic boom joystick. A slow progressive movement provides precision placement, or increased oil delivery can be achieved with a more aggressive pull on the electro mechanical joystick. All of this improves the operator’s ability to work with increased precision.

“The joystick is central to all operations,” Daniel said. “It’s ergonomically placed and is easy to use. It is electric over hydraulic, but it is proportional and very precise. The joystick has to be gripped firmly for it to operate. The quicker you move the joystick the faster the boom moves. Proportional roller switches allow minute control of the boom and the implement. It’s easy to operate all the controls precisely. It’s very good!” he added.

The cab is the nerve centre of the machine and is the largest in its category. The Merlo’s Dynamic Load Control System (CDC) is constantly displayed on a dedicated screen for instant viewing. An additional central screen displays information from the features menu, selected by the operator. Inching controls give increased sensitivity for creep movements; whilst a curved windscreen and air conditioning provide space and comfort in all conditions as well as excellent visibility of the boom at full height.

Daniel is very impressed by the Merlo’s stability.  “There has never been a time when I have felt it was unstable. The computer systems on board see to that by monitoring your operation. If you are heading into unsafe territory it allows you to retract the boom or implement and try again.”

The CDC system is responsible for this essential Merlo approach to safety. Its objective is to allow the operator to work in total safety whilst using the machine to its full potential.

Daniel felt that the Merlo Turbofarmer represented excellent value, “With the Merlo everything was included. It seemed to have more technology available without adding extra components. For example, the Weigh Cell Scale Monitor was important to us, and came as standard. Surprisingly, even with the amount of features it included, it was still a bit cheaper than other brands and the better option.”

Daniel concluded, “The Merlo seems so much more able than its competitors. It’s amazing what we use it for. Its never in the shed for long.”